I ride on bicycle in Madrid and so I can say it is a hostile City for cycling. The drivers are hostile, pedestrians and even the same cyclists are hostile. The configuration of its streets and lanes is hostile for cyclists. The terrible noise and contamination make it worse. However, I enjoy cycling through its streets. Especially on Sunday mornings and on labor days beyond rush hours.
Now that I live in Colmenar Viejo, some 30 km north of Madrid, I take the train with my folding bicycle. Then, from any of the stops of Chamartin, Nuevos Ministerios, Sol or Atocha, I ride on my bicycle to my destination trying to pass through the Retiro Park if it is on my way.
Cycling gives me freedom and feeling good to enjoy the nice streets, buildings, squares and living ambience, like no other transport mean can provide me. I can go faster and longer than by foot although some days I leave my bike to go walking, if the distance is shorter.
Since I am twelve, I ride on bicycle on the streets. First, I used to do it in my district, later in the Casa de Campo park and on vacation I rode on the village on the sea side. I’ve participated the first time in the Second Bicycle Festival in 1979 when I used to ride often in the city. I used to ride every Sunday on the circuit of Principe de Vergara Street.
I’ve also used the Metro a lot and I must admit also my car and motorbike.
However, I’ve always liked more riding on bicycle. During all that time the City has tried to facilitate the use of bicycles, to make it easier and safer. Today, there are more cycling paths on the sidewalks disturbing pedestrians and cycling lanes shared with other vehicles in the center of the streets. Cyclists are exposed to the heavy traffic with buses and taxis on their rights and cars behind. It’s too risky for many potential cyclists who prefer not to ride on. 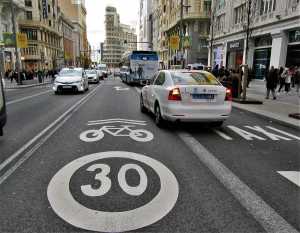 Consequently, there are only a few cyclists riding through the streets of Madrid. I believe that the ones who designed the cycling lanes and paths in Madrid, have ridden on bicycle very little. In no case they would take their children at the back on their bikes on those lanes.

Frequently, the paths are interrupted and have no continuation. Others are invaded by pedestrians or when there are works there is no signal of alternative ways.

Madrid Town Hall define the cycling lanes as: “Cycling ways especially conditioned, allocated in the first place for bicycles where motor vehicles should drive at a maximum speed of 30 Km/h, or less if so was advised”Ayuntamiento de Madrid. Types of cycling ways

I can tell you that, we, the cyclists, are not in the first place and nor motor vehicles drive at max 30. Reality is quite different.

The cycling ways should be part of longer routes that crosses the city to form a network which allow you to reach every corner of the city to become an alternative mean of transportation.

I would like also to point out the lack of safe parking places for bicycles. During my cycling years I’ve been robbed four bicycles. One in Madrid, another on in Barcelona and two more in a village in the Sierra de Madrid. The parking places available today ARE NOT SAFE.

The last thing you want is that your bicycle is stolen. If that happens, you won’t see it again. The city should count with safe parking places, even if you have to pay for them. In public parkings, in malls, supermarkets, sportive areas, schools and colleges.
We have in Madrid some bicycle rentals.I signed up for one of them and started using it but I soon quit it. I don’t like them. I don’t like those electric bicycles, not to use them every day in my city. I like using mine. However, when I cannot take my bike, it is great you have the chance to rent one. I’ve done it many times in other cities and other countries.

If safety, infrastructures and comfort are improved for cyclists, many more would join us in the streets like it happen in other cities in the world.
I go every week to a sportive center to swim. There are other activities there like pilates, cross fit, gym, spinning. Running on belts, etc. However, my bicycle use to be the only one in the parking. I cannot understand that no one takes its bike to go there. Instead, they go by car to run in a fixed belt or ride on a static bike.
Cyclists are not well seen in Madrid by the rest of the drivers. We are dangerous, uncomfortable, unforeseeable and aggressive. We ride under stress in the middle of the traffic in a hostile environment.
It’s true that we should ride more carefully, respecting pedestrians and traffic lights. But, we contribute to make cleaner, more friendly and free or noise and smoke cities. We ease our mobility but also the others’ mobility.
Bicycles, electric light vehicles and public transport together with wider walking areas are the future for big and smaller cities.
The traffic configuration should change like the presence of parked vehicles in the streets. They occupy a big space necessary for the mobility of the citizens.
After having known other cities in the world, I can say that Madrid has a great public transport. And it’ll be even better if it has preferential or exclusive ways for bicycles and other light clean vehicles and the corresponding parking places.
Spain should be a leading country in such transformation bearing in mind is a world power in turism and receives more than 80 million visitors per year.