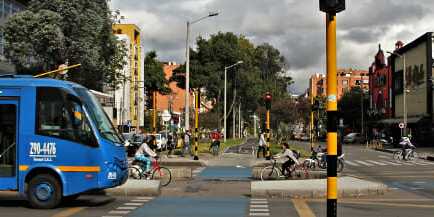 Many cities have urgent problems of mobility and pollution, even more during the rush hours. We see more bicycles, skates and light electric vehicles which ease the transportation for many people, using the bike lanes, narrow bike paths and even sidewalks disturbing pedestrians. No doubt, the use of those clean friendly means should be promoted adapting the streets to make them safer and regulating its use.

We’ll definitely change our cities making them cleaner, less noisy and more comfortable for all.

Bogotá is a big city of almost 10 million inhabitants. It is situated in a wide valley called sabana on the “Cundiboyacence Altiplano” beside the Oriental Andes chain at about 2600 m of altitude. The main part is flat with some incline to the firsts avenues from the 9th to the 1st, closer to the mountains on the East side. 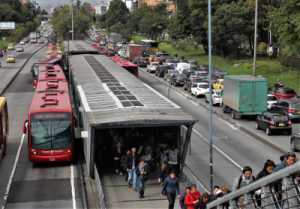 Bogotá has no Metro. There is no massive, fast, comfortable and efficient transport as it should have. Instead, it has the Transmilenio, bus lines on an exclusive lane. Today, obsolete, insufficient and polluting.

The city counts with a widespread network of bike ways through the main streets allowing to reach all districts. There are exclusive bike ways or also shared lanes with vehicles with a speed limit of 30 km/hr.

Furthermore, the city has many public parkings with surveyed space for bicycles. Most of the malls, supermarkets, restaurants have also safe parking areas for bicycles.

I miss that in Spain where my bike was robbed while I was eating in a restaurant in Barcelona. I left it parked in a bicycles’ parking place just in front, fastened with a chain, and near a police station (Mossos d’Esquadra).

Coming back to Bogotá, we also find many workshops for repairs or to buy spare parts.

Those are some of the advantages for bicycle fans to ride daily there. There are also some disadvantages like the torrential rains which can frequently surprise you. 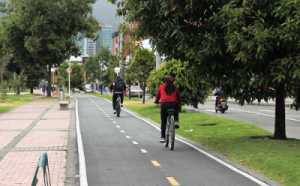 In view of the lack of a good public transport, bicycles have become a very convenient transport alternative to go to work or university, bearing in mind the big traffic jams that collapse the city at all time.

However, many car drivers and pedestrians complain about bikers as many of them invade their areas.

They are right, bikers should respect them. But also we need different streets, better for pedestrians and bikers. We should change the urban model to another cleaner, more friendly.

The centers in big cities should be more for pedestrians, bicycles and light electric vehicles, with green areas, surveyed parking and easy access to massive transport means.

I live between Bogotá and Madrid and I also travel frequently to other cities for work or pleasure or I try to combine both. During my trips, I use to take public transport, train, metro, high speed train, planes and bicycle. I always liked riding on bicycles since I learned in the Retiro Park in Madrid. Since I was 12, I ride on the streets. First in my district and later farther away to the parks or the cycling circuits started on weekends in the late 70’s. I took part in the 2nd Bicycle Fiesta in Madrid in 1979 and then in many others. At that time I was already riding on my bicycle in Madrid quite often when very few of us do it.

When I travel, if I have the chance, I rent a bike to move around the city to make longer routes, alone or with my family, in Spain, France, Holland or Germany. I also use it frequently in Bogotá.

Bicycles, electric scooters and other light vehicles are the future ot the mobility specially in big cities.